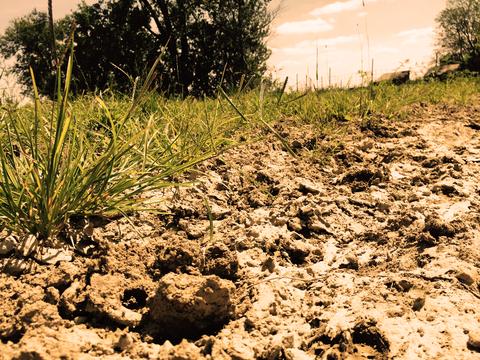 Making Soil from Dirt (And, yes, there is a difference).

At Honey Creek Farm, Tim Carter is turning dirt back into soil.  In 1974, Tim came home from Purdue to the family farm with the vision for America's "big ag" taught in ag classrooms everywhere. Through the 80's he followed after what the USDA said would be the future of food: confinement livestock, large-scale grain, genetically-engineered crops, and chemical combinations.  After two decades of working the third-generation farm, he started to notice that the rich black soils his father had left him were turning sandy, hard, and lifeless.  Industrial farming was converting rich soil into mere dirt—and, yes, there is a difference.

Dirt is nothing more than tiny rocks (sand and clay) and decayed plant material.  Dirt alone is dead.

But soil is more than dirt.  Soil is alive with microbial growth.  More than just dead organic matter, it’s rich with the fungus and bacteria that break such organic material down.  A mere teaspoon of soil contains millions of organisms and hundreds of species.  All that life has the capability to retain moisture and nutrients that dirt simply cannot hold.  Crops planted in soil are healthier, require less fertilizers, and are more drought-resistant than mere dirt.

Exposing that living soil to years of tillage, chemical applications, and monoculture will slowly kill off the cornucopia of life that makes soil.  In just a couple of decades, you’ll have what Tim found all over his farm: mere dirt where there once was soil.

It started with a decision that drew jeers and sneers from farmers in the 90’s.  Tim was among the first farmers in the country to adopt “no-till” farming—never plowing the fields under to start a new season.  Letting the dirt stay intact allowed fungal networks to sustain.  One fall’s stalks decayed while the next spring’s seeds sprouted.  Today, Honey Creek Farm has been untouched by a plow for over 25 consecutive years.

Next, Tim decided to aid those stalks in their decay by covering the ground through the winter with new plant life—rye grasses, clover, and even wild radishes.  While these so-called “cover crops” don’t actually produce a crop that Tim can harvest, there’s someone else on the farm that can reap their value.

As the harvest comes and goes, the cover crops peek through the soil just as winter sets in.  Just when you might think the fields are in lifeless slumber until spring, a hungry herd of cattle comes foraging.  And as they forage, they drop steaming piles of future-soil in their path.

Today, Honey Creek Farm is a biodiverse ecosystem.  Corn and soybeans are still harvested off the soils every fall.  But in between, a menagerie of soil-makers do their work.  Cover crops breaking down their dead predecessors into more soil, the cattle munching on their leaves, poultry scavaging for insects while dropping nitrogen-rich manure, and when the soil needs a particularly thorough “tilling,” the hogs are turned loose to root deep into the earth in search of grubs—oxygenating and dropping their own manure all the while.

Tim is turning dirt into soil, and soil into food.  You can shop Honey Creek Farms pasture-raised meats here, and support Indiana soils in the process.

Let us know your Zip Code so we can show you the local farms, artisans, and delivery options available in your local area.

Search Near Me
Market Wagon's mission is to enable food producers to thrive in their local and regional markets. We serve local farms and artisans with online shopping and delivery fulfillment services. Market Wagon has multiple delivery networks and fulfillment hubs. Let us know where you're at and we'll find the products and delivery options nearest you.